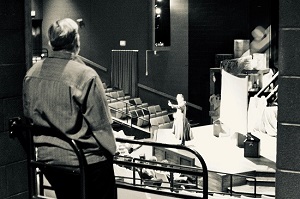 This last spring, I had a new play produced at my alma mater. Since it’s also my hometown, I was able to attend rehearsals as the new piece took its fledgling steps. The play was directed by Professor David Lee-Painter (DLP), a member of the university theatre faculty.

During rehearsals, DLP told me that a student had joined the company as dramaturg. Then he had to tell me what a dramaturg was. At that point I was a bit miffed. Here I was. The playwright with my extensive collection of research already completed and you bring in a—a—a what? No, really what was that word again?

Much to my surprise dramaturgs have been around since the 1800s and perhaps longer. I’d never heard of the profession and can only conclude that I missed that day in theatre history class.

After my show opened, DLP asked me if I would dramaturg his next show, This Random World (TRW) by Steven Dietz in the fall. Researching someone else’s play was vaguely terrifying. I knew nothing about how to do it. In the past, I would’ve fled. This time I said, “Yes.”

I had all summer to put this—whatever together AND learn dramaturgy. I’m already an anthropologist so I’m down with research—love it, truth be told. This project would happen outside of work and my other responsibilities which I’d been avoiding since my play went into rehearsals way back in February.

A few weeks after my play closed, DLP was invited to direct a summer show that would go up in less then a month, Sarah Ruhl’s The Clean House. He asked me to put something together which I agreed to do. I’m not sure why I said yes but I was already doing research. Another play didn’t seem like that big a deal. (Q laugh track.)

While he was out of town, I planned on a month free to work on other things. BUT he liked what I assembled so much that he asked me to get TRW done sooner rather than later. He wanted the design team to have it over the summer as they began their work.

So this summer I learn dramaturgy.

Dramaturgy, like many of the loves in my life, was something I backed into. Within this blog will be ruminations on things I discover on my journeys. Space will also be made for my other myriad interests.

writer, anthropologist, artist, dramaturg View all posts by Ariana B